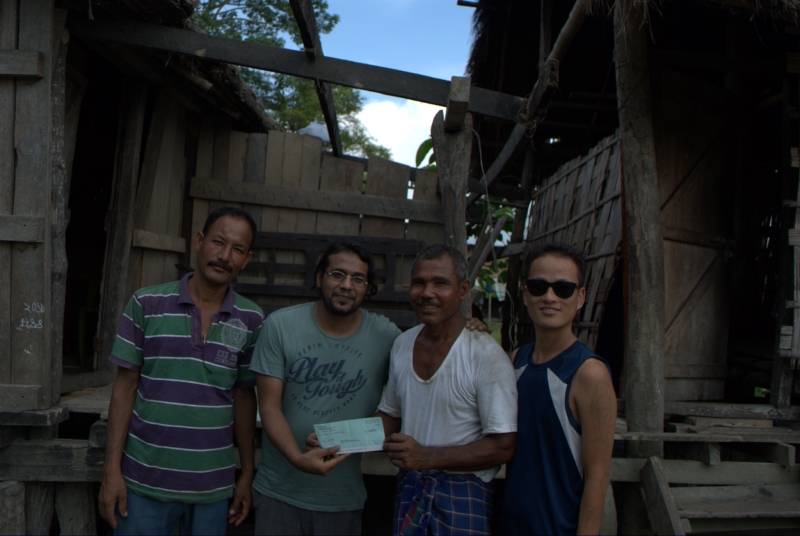 Little more than a year back, we’d enthusiastically begun our first responsible tourism project – a fundraiser meant to assist the forest man of India – Jadav Payeng, in his quest to grow more trees in the Brahmaputra Valley. With this post today, Greener Pastures is proud to announce that the fundraiser has been successful.

It happened two weeks back, when I and Cardo, a senior tour leader, went to meet Jadav and hand him over the funds. Accompanying us was Bijit Dutta, a friend of Jadav whom I had contacted through his blog to help us get to the forest man. The journey took us deep into the heart of Assam, until a dusty path meant for bull carts, miles away from the nearest road, lead us to the house of Jadav Payeng. Located in Kokilabari Village of the Mishing Tribe, his home is simple – made from bamboo, wood, tin and hay. There’s empty space around for cattle and pigs. Jadav was waiting outside his house and seemed enthusiastic to meet us. A simple man like any other, it is hard to imagine that someone like him has played such a big role in protecting the environment. But again, most good things are done by men who choose to live a remote and solitary life, without being bothered by the limelight of the modern world.

As we enter his compound, I notice he’s building another house, with two meter high concrete foundations in order to stay protected from the annual flooding of the Brahmaputra. As we strike up a conversation, I am quite astounded by the man’s knowledge. Though Jadav has only studied till 10th, his mind is full with ideas which even scientists would appreciate. He starts with explaining the reason he’s devoted his life to planting trees. It happened back in the seventies, when after a major flood, Jadav had found numerous dead snakes on an island in the Brahmaputra River due to erosion and no tree cover. Saddened by the lifelessness of the creatures and by the ineffectiveness of the government’s forest department, Jadav had taken it upon himself to plant trees, an occupation which he has been busy with for the last 30 years. Never a very rich person, a milkman, most of the money Jadav ever earned has been spent in buying seeds. In his fifties now, his decades of experience of being in the forest has gained him an amazing practical knowledge about both flora and fauna, as his forest is today occupied by many wild species, such as elephants, tigers, deer, rhinos and monkeys. Being nearby to Kaziranga National Park, this forest has become a second home for many creatures that migrate from Kaziranga due to overpopulation of the national park. However, he explains that with the wildlife come many problems for the locals. Elephants are the most notorious of all, often causing destruction to paddy fields and village houses. Till 2008, Jadav was living in the forest and was quite rich. But a group of elephants had destroyed most of his farms and house one night, robbing him of most of his finances. It was then Jadav shifted to Kokilabari, away from the forest. Many of the locals do not support Jadav. In fact, he has even been threatened for his life. But there are also others who support him, who have to live with the difficulties of wild animals which has become more of a part of their lives.

Jadav has many grand plans, and seems much enthusiastic, as in recent years the world has recognized his efforts. He has been invited across the globe to tell his story and to contribute his ideas to the leading environmentalists. He understands climate change is threatening the planet and has no boundaries. He tells me that greening only Assam will not work. If the planet is to be saved, the whole world needs to plant trees. For Assam, he has a beautiful scheme of forestation which sounds realistic and effective. As the Brahmaputra flows from east to west through Assam, his idea is to start planning forests in the upstream parts of the river. This way, nature would take care of the rest, as the seeds will be dispersed by the river and by other involuntarily means. Moreover, there are many empty sandbars in the upper reaches where this is possible. As Greener Pastures has its head office in Upper Assam, we will certainly help him in this. He also has ideas for the state of Rajasthan, when after a recent visit to the state; he saw a lot of fertile land suitable for forests.

Jadav had no idea about our fundraiser as we wanted to keep it a surprise. It was a joyous and significant moment, when I eventually got to tell him about the money we have raised for him. He had a humble smile upon his face. After the elephant incident in 2008, he is today very poor, and as Bijit tells me, our money has come at a very crucial time of his life. Jadav thanked us and assured that the money will be of help. We are glad for this. Being our first ever major responsible tourism project, we are happy to have been successful, as it is our very first step towards the aims we set out for. And for everyone who has supported us and have donated for Jadav’s cause, we appreciate a lot.

We talked for some more time with Jadav, and joked around a bit as it’s part of Assamese lifestyle. One last thing left was to see the forest ourselves. But being the afternoon of a very hot and sunny day, Jadav advised us to come early the next day, as his forest was far, there was lot of walking involved and dusk was approaching. He is the forest man, so we humbly accepted his advice. It was getting late and we had to go to Jorhat, the nearest town, to find a hotel. But before leaving, we handed Jadav a cheque of Rs.25,000/- . It was a proud moment. There were smiles all around, as each one of us felt a sense of accomplishment.

The next morning, though late, we arrive at Jadav’s house with a mission to see his forest, named Mulai Forest after his nickname. The journey to the forest is an hour long, but scenic. One has to cross a stream of the Brahmaputra by boat to arrive at a large island, which we did in Jadav’s rowboat. It is a two mile long walk in the island until one reaches the southern periphery of the Mulai Forest. From a distance, the woodland appears huge, thick and seems to occupy a pretty large portion of the horizon. It is impossible indeed, to believe that the forest is the creation of one single person. But yet, Jadav Payeng has made it possible. As we near the jungle, I spot two deer playing in open grass, but they shy away into the thickness of the woods within seconds. Jadav had no intention of taking us deep inside the forest, as it was unsafe due to wild animals and there were no forest guards accompanying us. We walked around a bit in outer parts, with Jadav introducing us to various plants, trees and fruits. There is a lot of evidence of wild presence in the forest as footprints and feces of different animals can be seen. Besides, as Jadav explains, even the diversity of birds is astounding, with the forest receiving many winter migratory species. It was a delight to learn from Jadav as his knowledge about nature is farsighted and gifted. An extremely hot day, we were forced to return to Kokilabari by the afternoon. Upon returning, Jadav got busy with the construction of his new house and we helped him. A remarkable person, every moment spend with him felt previous and wise. We didn’t feel like leaving, yet we had a long journey ahead of us to Meghalaya. We bid Jadav and his family farewell, and promised to meet him again and do our best to help him grow forests in the upper reaches of the Brahmaputra. As for Jadav, I’m sure his zest to plant trees will never be over.

A big thank you to the below individuals for having contributed to the fundraiser and for being a part of our first major responsible tourism project. With the funds generated, more than 2000 trees will be planted in Assam.

Jadav will be updating us on his efforts, information on which will be shared in the future.