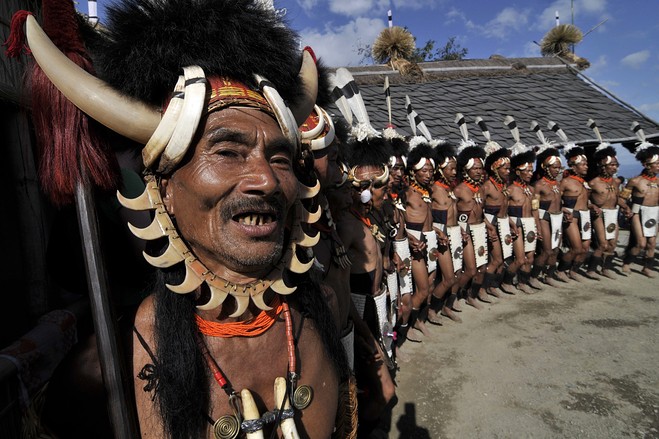 North-East India is rich with tribes (more than 200 of them) and celebrations. It can be well worth your time during your next vacation to travel to this region and take part in some of the celebrations. Festivals are important economic engines for many of these areas, and some organizers have even taken to promoting their gatherings on Facebook and other social media channels. The following are five popular and interesting ones to consider if you plan a trip to the northeast.

This is by far the most well-known and largest festival in the region, held in the tribal state of Nagaland in India. Held on the first week of December, the event revolves around food, dances, parades and other cultural events. It is a time of utmost celebration, of hectic drinking and feasting sessions. This festival brings together the 16 main tribes in the region and is an opportunity for the cultures of these groups to be co-promoted and maintained, through dance, music and food. (You can learn more via the official festival Facebook page on: facebook.com/hornbillfestival). If you are interested to visit, you can go through our itinerary for the Hornbill Festival.

This event takes place generally at the end of February-early March. Arunachal Pradesh is sparsely populated, and the festival honoring the New Year is a special time for families and friends to come together and celebrate. The Tawang Monastery is the main venue for this festival where elaborate dances in brilliantly colored attires are performed; they display the mysticism of Himalayan Buddhism and the event is considered to the completion of a year. The event also emphasizes family ties and colorful rituals bless the land for the coming agricultural season. If you are looking for a festival which gives some insight into North East Indian Tibetan culture, this is one of the best festivals in the area that should be witnessed.

Buddhism in Arunachal Pradesh is our cultural tour focussed on the influence of the religion in the areas in and around Tawang.

This celebration takes place early to mid-November and is quite popular with foreign tourists. It not only includes traditional celebrations, but also fashion shows to highlight fabric created in the state. There also is plenty of live music and a food and wine festival in conjunction with the festivities. All this, in the company of the ever charming Khasi Tribe. (Learn more about the event via: facebook.com/shillongautumnfestival).

You may feel you are on the set of a Hollywood production with this festival. This is an eight-day religious celebration in July that includes thousands of participants pulling chariots in what is quite a spectacular event in the Manipur region. This is unlike any festival you are likely to see in Europe with the tradition clothing and style of this festival a wonderful event to attend as a Western tourist.

Few things are better than a beachside festival. This one, scheduled in either January or February, takes place for two days along the banks of the Brahmaputra River which is one of the mightiest rivers of Asia. You can take in some cultural celebrations or cheer on teams in the more casual beach volleyball events. This is a very lively and popular festival which is well worth visiting if you have are in the area. Sport is an important feature of this festival, including with a beach version of cricket, combining India’s sporting passion with the local beach life. Beach cricket is to this region, what beach football is to the locals in Copacabana in Brazil.