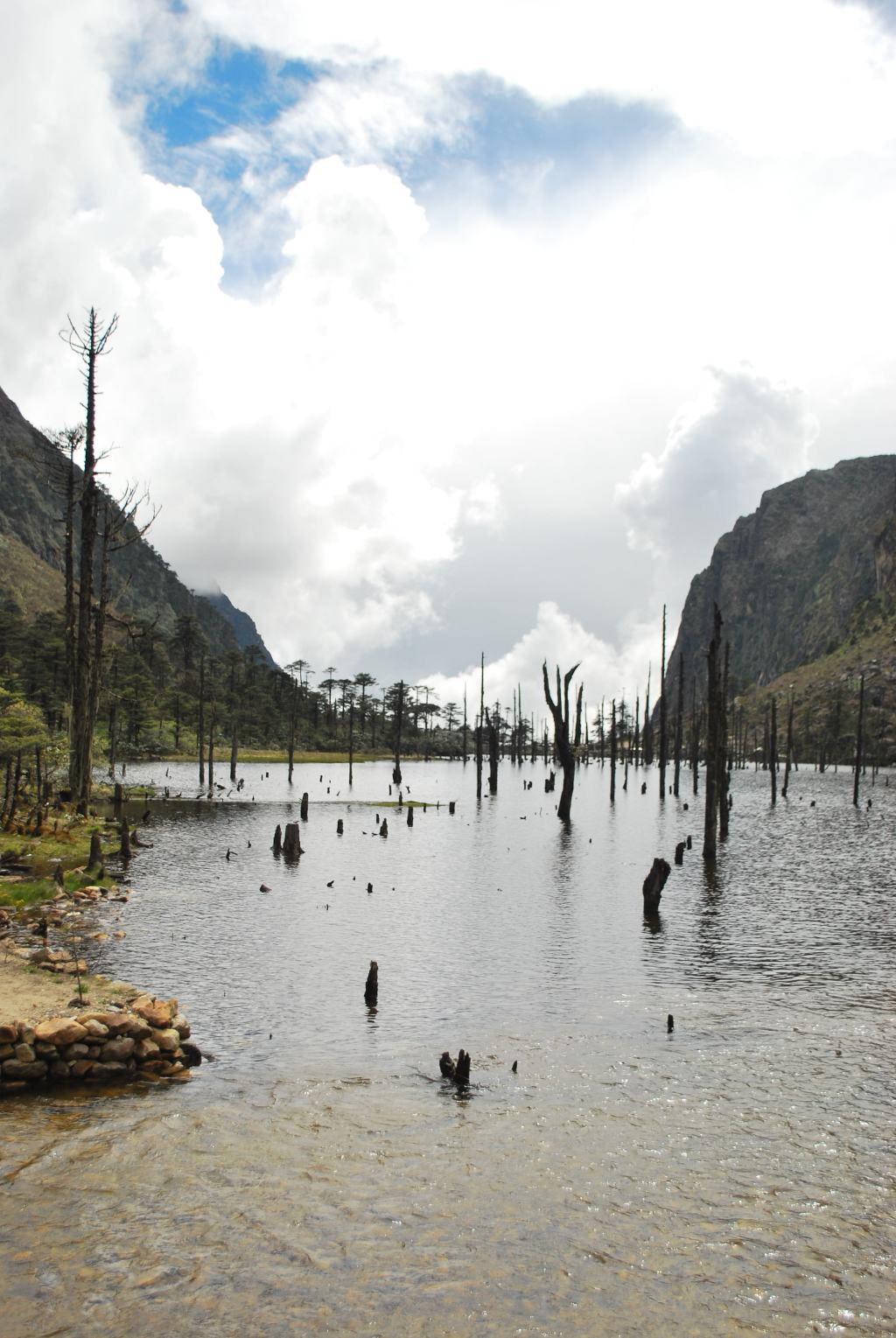 If the road to Tawang is proverbially beautiful, the lands beyond Tawang seem majestic and holy; never ceasing to humble a passerby soul. Tawang, a neat hilltop town lying at an altitude of 10,000 ft, along with the Galden Namgey Lhatse Monastery (translated as ‘celestial paradise in a clear night.’) sitting strongly at the top of the hill seems like a lost kingdom at first glance.

It was not easy to reach the holy city. Our car had broken down 10 kms away from the town, it had started raining, the car was stuck at a hair-pin bend, night was approaching and after a long wait we managed to hitchhike in an over-crowded car. But amazingly, hard work doesn’t seem that hard, when you are high up in the mountains. Maybe, it is because of the clean & energetic air or just that our basic instincts of survival makes the body adapt to these harsh lands; where hard work is a necessity and a way of life. Even, the many motivational messages, carved everywhere provide inspiration to all who can read English. Probably the builders who carved the roads in these harsh but holy lands grew wise along the way. Upon reaching we managed to find a room with beautiful wooden interiors. We were tired, and after a delicious meal of pork and rice, sleep was all the body could offer us.

It was a beautiful and clear morning the next day. From the window of the room, the monastery was visible and it felt good to be in a place of faith and purity. The plan for the day was that, we would venture beyond till the invisible line that divides the two giants; India and China. Excited with the prospect of traveling the high lands of the mighty Himalayas, we were soon on the road. We reached a check point of the military and had to take special permission to go further. Ahead lay critical territory, where every day and night the best of the Indian armed forces keep a vigilant watch over the cunning enemy Dragon, living in life threatening landscapes only to stop free democracy from being over-taken by forced communism.

After the check post, the road lead to higher altitudes. We were surrounded by dense alpine forests which soon turned to rugged rock and ice landscape. We crossed some empty bunkers, remnants of the sad Sino-Indian war of 1962 where many brave men died. Further on we crossed many lakes. All of them looked so holy, their waters as still as the mountain and untouched by mortal souls; only spirits could live in them. The snow-clad peaks seemed so near and the sky was painted in the blue of dreams. I was humbled as anyone else would be. I felt an urge to bow down, in respect to a supreme creative and intelligent source. We were on borderlands or rather no mans land. Somewhere in the cliffs, I could see a small cave. I wondered as to who could live there and who would want to live there and how could one even go there? Only on closer inspection could I see a flight of countless stairs carved through sheer rock leading to the cave; reminding me of the song “stairway to heaven” by Led Zep. A board hanging below at the foot of the stairway read “meditation center”. It is so mystifying to still see such a powerful place of devotion in this modern gadget filled world that one cannot escape the question of our existence. People still meditate for years in solitude in the mighty Himalayas, and they will certainly be wiser than us and may even teach us a trick or two about life.

The road ended once we reached Sho-nga Tseir Lake. We were only 5 kilometers away from China and on a clear day one can even see the ‘Great Wall Of China‘ if he/she is lucky. The lake was the most scenic of all I had seen on the journey. Surrounded on three sides by mountains which help create a small canyon like gap, only a small part of the lake faces the hills below and a beautiful stream originates from there, which would probably turn into a river somewhere down the hills. A small army camp of the Gurkha regiment is based there and a breath-taking lake-house of dreams stands at a bank of the lake. Trees grow in the middle of the lake with holy prayer flags tied to them. It is because Buddhists in winter walk on the frozen waters of the lake to tie the flags there. We decided to walk the whole perimeter of the lake and a good population of delightful mountain birds accompanied us on our walk. As we reached the end of the lake which opens into the hills below, a strong wind suddenly forced a cloud to enter the lake from the gap. We were at the bridge and fresh moisture from the cloud was hitting our faces at high velocity and the presence of thousands of prayer flags purifying the air made me feel so clean and blissful as I have never felt before. Without the help of shamans I was having a spiritual experience at that moment, something I plan to cherish and remember all my life. Rain was soon approaching and so after a heavenly lunch offered by the army men, we departed back to Tawang.

Our next destination was the Tawang Monastery. Little did we know, how shaken we would be by the visit. Situated right on the hill-top, the monastery dominates the whole landscape and an aura of purity radiates from this ancient structure. It is a home to many monks who come here to learn the secrets of Tibetan Buddhism. The main building comprising of the temple and prayer hall, is magnificently done. Images of life & death, and of Buddhist mysticism are elaborately displayed on every wall and the use of bright awakening colors makes the monastery look more like a piece of art rather than just a building. My friend was trying to demystify the meanings of the art works but only in vain. They were too deep for our consciousness to understand but nevertheless they do provide us with an everlasting solace and intellectual comfort. A giant 27 ft golden Buddha statue stands at the center of the temple. I felt compelled to bow down and pray. They say every journey has something to teach and I knew that once I step out of the monastery, a part of me will have changed. By the time we were done seeing the monastery, both me and my friend were exhausted but not physically. It was an emotional roller coaster ride, for the depths of Tibetan Buddhism are too hard to absorb for the mind of a stupid modern man.

We were leaving the next morning and I was ready for the future; it looked bright and everything seemed right. I still had fifteen hours of journey left in the Himalayas till I reached the plains of Assam. And I smiled with all the calmness I had collected.